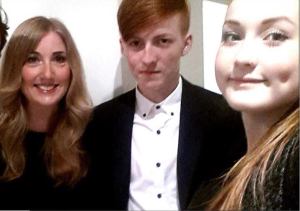 I consider myself fortunate to have found myself a single parent when my children were 14 and 12 years old and not when they were younger. The sheer volume of work, every minute of the day, that very young children generate must be overwhelming on your own, and I take my hat off to the amazing mums and dads who do it.

Occasionally, over the years I have had friends tell me that they have been a ‘single parent’ this week.

‘John’s been away on business for 4 days, so I’ve been a single parent too’, they say.

Anyone who is actually a single parent will recognise this sort of attempt at joining your (not particularly desirable) club, and it’s well meaning, of course. Any time spent caring for children alone can be exhausting.

But of course, this isn’t really what single parenting is.

Single parenting is parenting with no prospect of anyone taking equal responsibility for those tasks. Ever. There is no one coming in 3 or 4 days to give you a break. There is no one at the end of a phone to tell you you’re doing a good job and they’ll be home soon. And of course, it’s not just the parenting. You will be doing all that mumming or dadding alone, and then absolutely all of the other responsibilities of adult life and of householders will be exclusively yours too. Going to work (that bit is pretty easy really), paying the bills, sorting out the tax, doing the housework, maintaining the car, maintaining the garden, maintaining the house, doing all that household admin. All yours and yours alone. Lucky you! No one is going to run that errand for you while you cook the dinner, or run quickly round with the hoover. No one is going to sit on the phone for an hour trying to sort out a problem with your phone bill while you make a start on the laundry. No wonder single parents are so knackered.

Post separation/divorce parenting for me has turned out to be quite different to how I had imagined. There has been no 50:50 split, not even every other weekend relief. Six evenings a month are spent with their father and his new partner – if they are not away on holiday or on business, which is often. No half the holidays each. No attendance at parent’s evenings and one long weekend in Melbourne for my son and 5 days on the Gold Coast for my daughter being the sum total of holidays spent with their father in nearly 5 years. And when he is not well, he cancels. Oh how I’ve wished this worked the other way…All this is his loss, of course. But it has meant that the burden of working out arrangements which balance my work and half decent parenting have been…challenging.

As they’ve gotten older, of course, the need to be there in a supervisory capacity has reduced, but the need to have a presence, to exhibit my commitment to parenting them and my availability to them has to some extent gotten greater. Through these teenage years they need to know you are there, that you love them and that they are your priority at all times, even when they are being – quite frankly – a bit dreadful.

So it’s not really been the tasks that are so exhausting. No amount of food preparation, taxi driving, laundry, homework nagging, concert and sport watching and cleaning up compares to the sheer overwhelming responsibility of it all. The agony of decisions, for example, about where they can drive, with whom, at what sort of time of night, is left entirely up to me. Which parties they can attend. What time they should be home. Who they can hang out with. I could go on. Obviously the children always think I am being over cautious and I probably am – I have no-one to run these decisions past. There is no one to say – don’t worry, they’ll be fine…and then to sit up with you allaying your fears when they are late and not answering their phones.

I’ve never felt the loneliness of being the single mother of a teenager quite so keenly as on the occasion of my daughter’s 16th birthday party. If I had any advice to other parents about 16th birthday parties, it would be to strongly advise against them based on my experience, but suffice to say that by 9.45pm I had closed said party and contacted parents to collect their children. As if I didn’t already feel terrible enough about it all (and with the distance of time, it was not soooo bad – some smuggled-in alcohol and a couple of drunkards), in a conversation with a father after the event, he said to me – in a tone that could only be described as judgemental and patronising –

‘I understand you are a single mother’

and then went on to suggest that in view of this I should have known not to hold this party. Because obviously there was only one way this could possibly go, given that I am a single mum…

Over time I’ve developed my own system to check out my decisions in the parenting realm. I ask myself – if the thing I am afraid of happening, actually happened – if they crashed the car, went missing, got hideously drunk and did something silly – would I feel comfortable explaining to other people (including their father) what safeguards I had put in place to prevent this from happening? It’s not foolproof but it helps. I’ve explained it to the children, and they seem to accept it. I’ve never been the parent of young adults before, so I’m just feeling my way…

I’ve been so very, very lucky to have great children, who actually have given me very little to worry about. But all parents know that this doesn’t stop us from worrying. Sometimes I think I’ve done a good job, they are nearly done – it looks like I am going to be able to send them out into the world safely and as great human beings. But I know there is still time for it to go wrong and that, in fact, parenting is never over.

What is sure though, is that I wouldn’t change a minute of any of it. Being a mum and raising my two children will, without a doubt, be my greatest achievement, my greatest joy, and the absolute best use of my time, my energy and the space in my brain.

And God knows, as I get closer and closer to the moment when they both fly the nest, I know I’m going to miss this part of my life terribly.