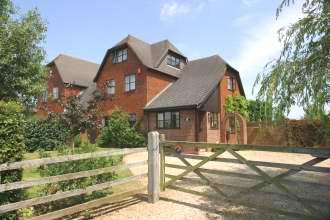 These days – not often but occasionally – I feel like I’ve finally properly become an adult.

In my early thirties I was a wife and a mum and a bit of a career woman, and my ex-husband and I bought a lovely house in the New Forest in the UK. That’s it in the picture up there.

All of those things indicate a certain level of maturity – age, roles, marriage, house buying.

But I used to sit at the end of the garden in the summer house looking back at the house and wonder…how on earth did I become a person who owned a house and had children and was trusted with a responsible job – when I’m actually still just a child?

Nearly 17 years later I don’t feel much different – except that I don’t have the buffer of a life partner to protect me from the vagaries of life. I need to learn to be an even more adulty person than I’ve ever been before.

There are landmarks of course. Recently, for example, I bought a car.

I’m 47 years old and this is the first time I’ve ever bought a car on my own.

Since my separation and subsequent divorce I’d been driving around in a bottom of the range, 1.1 litre, manual Nissan Micra. Nothing wrong with that really in the wider scheme of things, and when I lived and worked in the city, rarely actually using a car, it was perfect. Then my office moved 50 mins (on a good run) away, and my days were filled with stopping and starting on possibly the country’s most congested highway, the M5 – which passes through possibly the country’s most congested tunnel. You have to live in Australia to properly understand the true horror of being stuck in a tunnel in the summer.

I spent over a year trying to persuade myself to buy a better car, more suited to the travelling I was doing. But it seemed too risky, just way too scary. I didn’t feel equipped to do such a thing. What if I bought a lemon – a money pit? Then I discovered that I could take out cover for virtually anything that might happen to it, and I felt more confident. I bought a Jeep, having gone out with absolutely no intention of buying anything like that – but it was red and I liked it, and I don’t know anything about cars at all, so this seemed like a good enough reason. I’ve had it for three months and so far so good (except that it consumes significantly more petrol than the Nissan obviously). I feel like a grown up driving it – and my daughter feels like a grown up because she got the Nissan. Everyone’s a winner. Hello Adulthood.

Then I do stuff that reminds me that I am in fact just a teenager hiding in a middle aged woman’s body (oh how I wish it was the other way around…).

My lovely friend Jim came to stay over Christmas. Whilst he was here he commented on how isolated the house is and that I ought to have some candles and a torch ready – as it is the sort of place that would be very scary in a power cut. Great idea – totally agreed.

Today, after a few days of very hot and humid weather there has been a big storm. When I got home there was a lot of debris on my paths and signs that it had been pretty blowy here, but the storm had pretty much passed apart from some wind and drizzle.

So it was a bit of a surprise when at about 10.15pm all my power went off and I was plunged into the sort of darkness you only get when there are no lights anywhere around.

I was reminded of the great idea Jim had – that I had done nothing about. With 2% on my mobile phone I was able to use the flashlight function for long enough to establish that there was a lighter beside a fragrant candle near the tv. This was good for lighting one candle only before giving up the ghost. Finding a bit of paper or similar to use to light two other candles proved challenging but in the end not impossible. My laptop – on which I am writing this post with the help of a mobile dongle – allowed me to take advice  (and comfort) from friends on Facebook.

When this sort of thing happens to me, I remember that I am not yet really an adult. This sort of stuff would not happen to my parents.

Recently I was watching 24 hours in A & E (which really is a very heartwarming show and a great showcase for the fantastic NHS). For reasons I’m not sure about, when they interviewed a consultant who was probably in his late forties (so the same age as me), they asked him when he knew he was a man*. He became quite upset, and described the moment when he was going somewhere with his now quite elderly father, and his father gave him the car keys and said ‘you drive’. He said he felt that a transaction had taken place in that moment, where his father had resigned his position as driver and somehow as leader and patriarch and said ‘now it’s your turn son’.

2 thoughts on “In which I ponder…being a grown up”