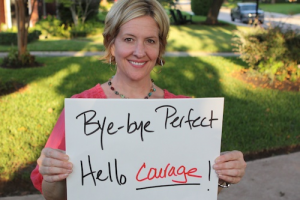 On Thursday evening I went to see Brene Brown speak at the State Theatre. If you’re not familiar with her, she’s a research professor at the University of Houston Graduate College of Social Work, who has spent the past thirteen years studying vulnerability, courage, worthiness, and shame. But for most people who’ve heard of her, it’s mainly because she did a TED talk called The Power of Vulnerability, which is one of the top five most viewed TED talks in the world, with over 25 million viewers.

I first saw that talk soon after leaving my husband, and as the wife of an addict, it hit a nerve. It was the first time I had heard someone articulate what I instinctively had known about my husband and I’ve worked hard since to try to ensure that my life is authentic and brave, and that I surround myself with authentic and brave people – because I’ve learnt that is where the joy is.

So on Thursday night, Brene talked about the ‘Shit First Draft’ – or the way our instinctive emotional responses to triggers lead us to make up stories to try to explain our feelings. To illustrate this, she told a highly amusing and rather familiar story about her reaction to her husband once coming home, looking in the fridge and saying ‘we don’t even have lunch meat in this house’.

Now, I know how that would have played out in my house.

But the point she was making was that the stories we make up are all about us and our frailties, and really nothing at all about the person who has triggered us. So she had made up that her husband was shaming her for being a bad wife and mother and for failing at wife-ing and mothering. And further that he wanted to make sure she knew she was being shit at both – when there was really no need to do that because she already knew. When all he was actually doing was saying there was no lunch meat in the fridge, which was disappointing because he was really hungry and he’d been thinking that eating some lunch meat* would be good.

The reason she reacted in the way she did was that, in common with many of us, she has an internal narrative running that says she is not being a good wife or mother and that essentially she is not enough. And now I say – find me a working mother and/or wife who does not have this story running a loop in their head on an almost permanent basis. Or is that just me and Brene?

Anyway, she told us that the way to try to mitigate this type of reaction was to own it, to recognize it, to name it. So in this situation you would say

‘So the story I’m making up here is that you think I’m a terrible wife and mother, and you think that my failure to purchase lunch meat is evidence of this, and you want me to know this so that I can feel terrible and know that I am terrible’

And the idea is that when you say it out loud, the subject of your ire at least has an idea of what is going on for you, and can reassure you that you’ve got that wrong (assuming you’re not married to an asshole). In addition, saying it out loud will sometimes give you access to the absurdity of what you’re thinking, and you can start to recognize patterns.

I thought this was excellent advice. I’d been to the talk with one of the Julie’s and we talked about it over a couple of glasses of nice sav blanc in the bar afterwards, and I thought I was definitely going to implement this in my own life, because I reckoned that sometimes I did this sort of thing. Not often obviously. Just sometimes.

I walked in the door at 11pm to be greeted by a slightly grumpy teenager who wanted to know if I had printed her textiles project. I had, but it was still in the car – which in my house is 56 steps up a cliff away. Realising you’ve left something in the car is annoying at the best of times here, but if you’re tired I’m not exaggerating if I say it can be traumatizing.

So neither of us wanted to go up to the car, and it turned out that she had been waiting for me to come home because the textiles project wasn’t finished and she needed the printing to complete it. She hadn’t told me this before, but she did now, and she wasn’t that happy about it.

I was immediately pissed off. Properly pissed off. Angry is probably a fairer description of how I felt. And I said a number of things that I won’t repeat here, but did not exactly cover myself in glory. I may have slammed a couple of doors.

Then I realized what I was doing.

I actually have quite a large body of documentary evidence that would suggest that this is not what my daughter thinks. I have cards, little notes, gifts. She actually thinks I’m the best mum anyone could ever have. I think she’s even used the word inspirational**

Of course the reason I think my daughter is thinking that is because that’s what I think. And I acted angry when actually what I was experiencing was shame.

So I went and had a chat with her. I told her that I feel a constant tension between pursuing the things that help me to have a happy life, and being the sort of 100%, 24/7 available parent that deep down I think I ought to be. And I’ve felt like this ever since I had the children, but even more so since I left their father. Because although I’ve never regretted leaving him, I know that the children have not benefitted from the loss of that nuclear family unit, and I very much wish that I had been able to provide it. If I was to have chosen a life for them, it would have been with a mother and a father who loved each other and a family life where I was mainly at home, not working long hours as I do now, and that there was all the stability that life means. It’s what I would want for them now as my children, and later when they might have children.

But that’s not the way things have turned out and I feel bad – guilty – about it.

The thing is that I could have stayed with their dad. I could have carried on living with him – I’d got used to the way our life was. I was unhappy. Very unhappy. There was a big empty hole where the love should have been. There were the women. And the rest. I was on anti depressants to treat the anxiety that is eventually unavoidable when you never feel confident that you are cared for, or enough for 13 years. But I’d lived with this for 21 years. I probably could have carried on living with his behavior.

The problem was that I couldn’t live with myself if I stayed.

I stayed way longer than I should have done, because I wanted to know I’d done all I could – that I would be able to look my children in the eye knowing they were hurting, and say ‘I honestly did my best. I gave it my best shot’.

I think the time has come to let go of that guilt. I may have been the one who ended the marriage, but it wasn’t my fault, and really my ex had left emotionally many years before I watched him walk up the road with a suitcase. If I could have given the children the family they wanted – that indeed I wanted – I would have done…if I could have done that without sacrificing my sanity, my potential for joy and my self esteem.

In the end I decided that I couldn’t, and I’m going to live with that.***

*what even is ‘lunch meat’?? Wasn’t it Winston Churchill who said that Americans and English people were ‘two nations divided by a common language’?

**this led me to reflect on what an utterly uninspiring life I actually lead. All I’m really hoping is that I might eventually inspire one of my children to remove the collection of damp towels and rotting food from their bedrooms. Then my work will be done.

***which leads me to Brene Brown’s latest book in the title ‘Rising Strong’ and what it means to be brave and brokenhearted.

One thought on “In which I ponder…rising strong”